With over 25 years of Feng Shui study, Deborah is a senior disciple of world-leading Feng Shui authority, the late His Holiness Grandmaster Thomas Lin Yun. Her training began informally as a young girl, when her father taught her about Feng Shui and its influence on her ancestors.

Deborah’s first career as a nationally acclaimed television producer for several decades earned her numerous awards, including six Emmys. She was a pioneer in introducing Feng Shui to American audiences on the Arts and Entertainment Network in 1988 featuring Grand Master Lin Yun. Deborah then produced and hosted the successful PBS program, “Feng Shui: Creating Environments for Success and Well-being” which aired from 2000-2005.

As a Senior Feng Shui Practitioner for 25 years, Deborah is in demand worldwide and called upon by high-profile companies, visionaries and game changers.

Confidential Clients: Deborah has many prominent clients who request anonymity and NDA’s (Non-disclosure Agreement). Some include:

Many people fear that Feng Shui requires tearing down walls, moving doors or windows, and costly remodels. Deborah offers simple, artful, inexpensive design solutions. Her guiding mantra is “for every Feng Shui problem, there is a solution.”

“I distill the complexities of this ancient science so it can have practical applications to everyday living. Much of Feng Shui makes sense once you realize how much your surroundings affect you. Some rooms are inviting. Others make us feel uncomfortable. It usually has to do with the Feng Shui of the room. The furniture layout and color of a room can either block the flow of ch’i (energy) – causing illness and stress – or enhance ch’i- leading to good health and success.”

Deborah emphasizes, “The bed location is one of the most critical Feng Shui considerations. It could mean the difference between success or failure. Your bed should be positioned facing toward the room entry with the widest view of the room, so you can have the optimum benefit from the incoming ch’i. This ‘commanding position’ will encourage peaceful sleep, better health and greater success in life.”

A Chinese-American, Deborah blends Asian tradition with Western aesthetics. A common complaint is that some of the Feng Shui remedies are too obvious and conflict with the interior design of a space. Deborah respects the design preferences of each client and offers artful solutions that complement the décor. She says, “There are many levels of Feng Shui remedies. I try to find the best fit for the client and their environment.”

Every Home “Tells a Story”
“I’ve seen hundreds of homes in my consultations and as I walk through each one, I can see the issues and challenges in my clients’ lives during my Feng Shui analysis. I often hear, ‘how did you know that?’ I believe the blueprint of your home is also the blueprint of your life. Your home tells your life story.” 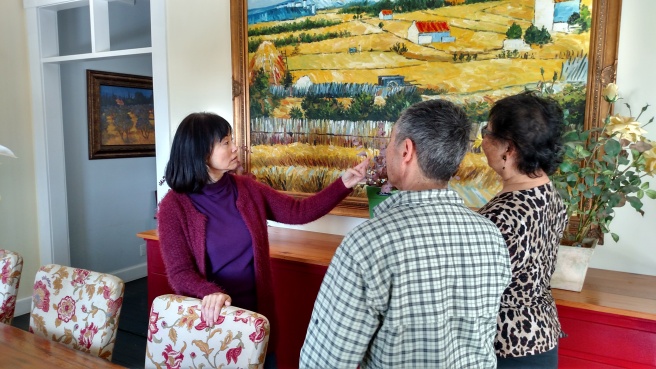 Designing for a Higher Purpose
“Feng Shui is more than just moving furniture around. It’s important to recognize that your environment is an active force that influences your mind, body and destiny. Feng Shui is a committed approach to a way of living-of designing your environment from the heart and for a higher purpose-to enrich your family, your dreams and your being.”

Philanthropy
Deborah is guided by the Buddhist precept, “One good deed averts a thousand evils.” She is now working with senior centers to create a “memory ward” for those with dementia. Deborah also gives her time to the George Mark Children’s House in San Leandro, CA, the first children’s hospice house in the U.S. She has gifted Feng Shui consultations in silent auctions for charities, such as the American Leukemia & Lymphoma Society.

Wedding Officiant
Deborah has forged friendships with many longstanding clients and has had the honor of performing wedding ceremonies for a number of them.

Deborah has been featured on PBS, DirecTV, the Home & Garden Network, and in major newspapers and magazines. She also lectures and conducts Feng Shui workshops.

“I can appreciate the design intention to bring the beauty of the surrounding landscape in through the openings (of the stadium), but two openings are like cracks in a bowl, draining energy and money. This might translate to more fatigue, mistakes and turnovers and less prosperity…two mouths can be conflict or argument; energy and finances can dissipate.”

Footnote: When the 2014 season began at the new Levi’s Stadium, the San Francisco 49ers were one of the favorites to win a Super Bowl. As the season unfolded, however, turmoil ensued. Several players were arrested and the 49ers finished with a record of 8-8, missing the playoffs for the first time under then-head coach Jim Harbaugh . Harbaugh’s controversial post-season firing began an off-season upheaval.

Out of 32 teams in the NFL 2015 season, the 49ers rank last in both points scored and yards gained.

Edutopia, George Lucas Educational Foundation -“Feng Shui in the Classroom.” – Deborah consults a 6th grade teacher on how to create a learning environment to promote clarity, focus and creativity.

PBS: Feng Shui:Creating Environments for Success and Well-being – The success of Deborah’s PBS television program has launched development of a TV series and companion books.

What People Say About Deborah Gee

"After a slowdown in my company, we implemented the Feng Shui remedies that Deborah recommended for my business and home. During the year, my business increased 85%, my husband's health significantly improved and there's an indescribable harmony to our home. Deborah brings powerful benefits through her work that only a master practitioner can deliver."
Allison B., President & Owner, marketing firm

"I have a lot of trouble sleeping, so Deborah focused on making Feng Shui changes in the master bedroom. After we painted the red accent wall to a soothing green, changed the side of the bed I was sleeping on and did a few other remedies, I had such a great sense of comfort and healing. I sleep better and communication with my partner is so much better."
Joya Y., legal assistant

"I am a mortgage banking manager for one of the largest banks in the world. Since I met Deborah over 10 years ago, my life has completely changed in the most positive way. I have consulted with her for my workplace and house. We are truly enjoying great success, love, harmony at work and at home. I have recommended Deborah to many of my friends, and they ALL love how she has helped them!"
Chery T., Mortgage Bank Manager, Confidential World-Leading Bank